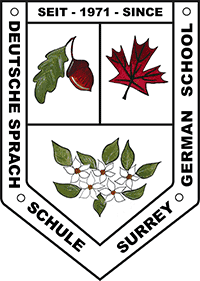 The Surrey German Language School was founded in October 1971 to preserve the cultural heritage of its respective country of origin for its children. Throughout this history, it has been supported primarily by a number of individual parents.

Classes started in two modest basement rooms of the Sunshine Ridge Baptist Church in Surrey with 42 students and two teachers. By 1973 the school had grown to four classes and was moved to St. Angela Academy in Delta, which offered proper classrooms.

Further expansion forced the principal, Mrs. Ruth Berndt, to look for new facilities once more. The Surrey School Board offered her adequate classrooms at the Guildford Park Community School. Under the leadership of Mrs. Berndt in collaboration with a devoted staff and the voluntary assistance of many parents, a school developed within a few years, which has found recognition exceeding the boundaries of British Columbia.

In 1984 Mrs. Berndt entrusted the school to Mrs Isolde Hey who furthered its degree of professionalism, gaining yet further recognition both in Canada and Germany. Since 1983 the Surrey German School, as one of the few in Canada, is able to offer preparatory courses leading to the examinations for German Language Diploma I and II.

From 1991/92 until 1998 three different principals led the school – Johannes Sauer, Siegrun Price and Thomas Falkenberg who all left their distinctive mark on the school.

In 1998, Mrs. Dagmar Cox took over and has provided dynamic leadership as principal of the Surrey German Language School. Mrs. Cox joined the Surrey German school staff as a teacher in 1989. Born in Austria, growing up in Germany, and raising her children in France, Mrs. Cox brought an international perspective to the school. In 1985, her family immigrated to Canada, and they made this country their home.

In 2011 the school celebrated its 40th anniversary.

In 2016 the school enrolled 140 students in 11 classes including Pre-School, Kindergarten, 4 German speaking classes, 4 English classes and the language diploma class.